Cover art is the large word "Scout" with a photo of boys white-water rafting above, and a photo of a juvenile bald eagle's head and US flag below. Back cover has a reproduction of Joseph Csatari's "All Out for Scouting" painting and a photo of a Scout on a zip line. The front-cover subjects are not obviously Scouts since they are not wearing uniforms; the zip-liner on the back cover is wearing a Scout T-shirt; and the Scouts in Csatari's painting are wearing the pre-1981 uniform. The large word "Scout" on the cover is done in an unattractive font irregularly splotched with dozens of little colored dots. Similar dots are all over the covers and on many pages of the Handbook; the dots are distracting and make those pages look busier than they already are. 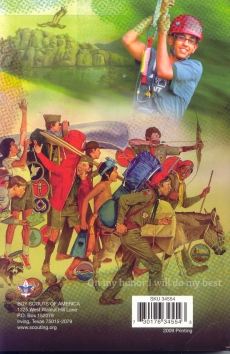 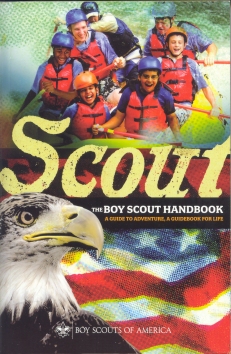 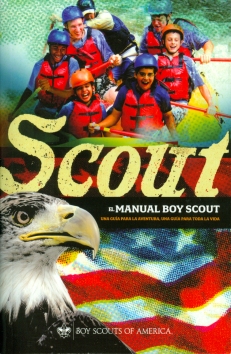 This is the third Boy Scout Handbook written by Robert Birkby (former director of conservation at Philmont Scout Ranch). It updates and continues the trends in his previous two Handbooks. It includes the usual "Parent's Guide" insert on how to protect children from child abuse (below right). I've noticed over the years that these inserts are rarely removed from the Handbook, which would imply that most parents don't read them. The first printing comes cellophane-wrapped, and includes a very colorful 24-page history of the Boy Scout Handbook (below left). In addition, pages 4 and 5 of the Handbook have a briefer history of the Handbook. 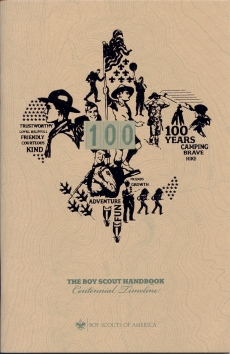 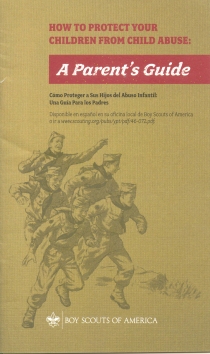 BSA makes a big deal that this is their "First Green Handbook", not just 100% recycled paper, but chlorine-free manufacture, chain-of-custody tracking from "well-managed and controlled sources", down to the use of biogas in the paper manufacturing process.

BSA also states that the 12th Edition "is a tribute to 100 years of the Boy Scout Handbook", filling it with quotes and artwork from previous Handbook editions. While this 'takes me back' as an adult who has lived through some of this history, I'm not sure how interesting today's 11-year-old Scouts will find such history trivia.

The book is colorful, and filled with action pictures. It projects to readers that Scouting is an adventure, making the book a resource for adventure rather than just an advancement manual. It puts the ideals right up front, starting with a full chapter on Leadership. This is the first Handbook to have its own website (www.bsahandbook.org), which is referenced repeatedly at the bottom of dozens of pages (although the website still exists as of 2019, it has not been updated since the 12th Edition expired). You can also download the Handbook as an iPhone app.

This is the first Handbook to discuss geocaching and the food pyramid, and it adds an unusual new knot—how to tie a necktie. It also introduces the 'EDGE' method of teaching skills (Explain, Demonstrate, Guide, Enable), and adds EDGE to the advancement requirements for Tenderfoot and Life ranks.

The title page is a reproduction of the first page of the color insert found in the first printing of the 4th Edition (1940) with a 'BSA2010' logo added. This even includes the misleading '3 Duties' (duty to God, duty to self, duty to country) at the bottom of the page [the correct 3 duties, represented by the three fingers of the Scout sign, are duty to God and country, duty to others, duty to self].

The Handbook reduces the number of main sections (with color-coded pages) to three: Scoutcraft (5 chapters), Woodcraft (2 chapters), and Campcraft (5 chapters). This harks back to the first three chapters of the 1st Edition (a deliberate choice by author Birkby). Leave No Trace fills an entire chapter, and is more strongly emphasized in advancement and leadership (including a new Scout leadership office called Leave No Trace Trainer). The Handbook also adds a second new leadership office, troop webmaster.

The book explains how to retire a worn-out flag, and why US Army uniforms display the flag on the sleeve reversed from the way it's on the Scout uniform sleeve. The book states that "one nation under God" in the pledge of allegiance should be said without a pause.

The typeface is much smaller than previous editions, and the stylistic smudges/dots on most pages make reading more difficult.

Uniform—The 12th Edition continues a disturbing trend of de-emphasizing the full uniform (often called 'Class A' uniform), encouraging the wear of what many troops call the 'Class B' uniform [BSA hates those terms, by the way—although readily understood by any Scout or parent, BSA apparently feels they are too militaristic; though they are allowing a T-shirt company called 'ClassB' to advertise in their magazines]. Indeed, this Handbook states (on page 33) that the full uniform is primarily for indoor wear!—"Proudly wear your uniform to troop meetings, ceremonies such as courts of honor, and most other indoor troop functions. When you're headed outdoors, you can pull on a T-shirt with Scout pants or shorts, or wear other clothing that is right for the events of the day." [ironic, considering that BSA also calls the 'Class A' uniform the "field uniform"!] If you have any doubts about the trend, the 2012 updated official BSA "Guide to Awards and Insignia", on the first page under 'Official Policy', replaces this statement from previous editions ("The uniform encourages them [Cub Scouts, Scouts, etc] to take Scouting seriously because of the investment in uniforms by parents of youths and by adults.") with this one: "While wearing the uniform is not mandatory, it is highly encouraged." At least the new 2015 Troop Leader Guidebook (the BSA's adult leader manual) still lists 'Uniform' as one of Boy Scouting's eight vital Methods, and clearly states that troops do NOT have the option to substitute blue jeans for official trousers ("troops are not allowed to modify the uniform by, say, specifying blue jeans instead of Scout pants or shorts.").

A number of errata would seem to indicate a little too much rushing to get this book published. For example, the first line of the history on page 4 gives 1899 as the year of the Brownsea Island camp (it was actually 1907). Since the siege of Mafeking was in 1899-1900, it looks like a line or two perhaps got omitted. On the inside back cover, the Patrol Leader badge is missing a bar (should have two bars, not one). And although BSA modified their uniforms a year before this Handbook was released, the sewing template on the inside back cover shows the old-style uniform (badges on the left sleeve are in different positions on the new uniform [although BSA has more recently returned to the previous shirt style, removing the little pocket on the left sleeve]). The most recent printing managed to update the Centennial Quality Unit Award to the 2012 Journey to Excellence Award on the inside back cover, but didn't correct the Patrol Leader emblem right next to it. Perhaps BSA should copy the inside back cover from the 2009 first printing of the Spanish-language version of the handbook—which shows the new uniform style and the correct Patrol Leader badge with two bars.

This handbook is available with either a perfect (glue) binding or spiral-bound, which allows the book to be opened flat and increases the likelihood that pages won't be lost. The BSA also has released a Spanish translation of the complete handbook.

The six-year run of this handbook makes it one of the shortest tenured handbook editions (only the 1st and 13th Editions lasted fewer years), and the 1.375 million copies are the fewest copies of any handbook since the 1st Edition.