Cover artwork modified from Baden-Powell, line drawing of a Scout holding a US flag on a staff (taken from B-P's Scouting for Boys, with the original British flag replaced with a US flag). [For comparison, the Baden-Powell original is to the right.] 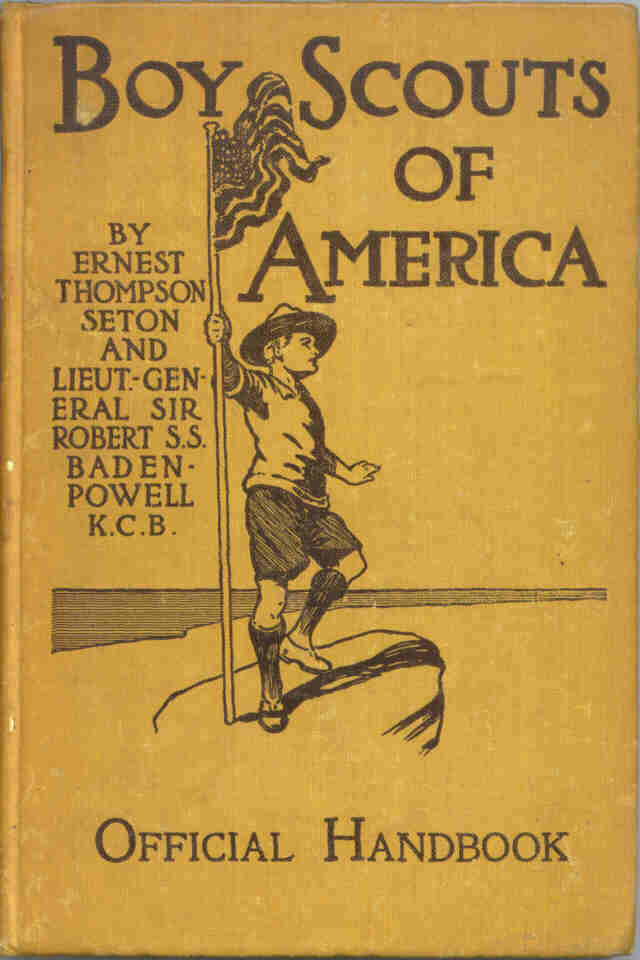 The BSA calls this Handbook the Original Edition rather than the 1st Edition because it was intended strictly as a temporary Handbook until they could standardize the program and publish a permanent Handbook. The cover title is Boy Scouts of America Official Handbook. The title page says Boy Scouts of America A Handbook of Woodcraft, Scouting, and Life-craft by Ernest Thompson Seton With which is incorporated by arrangement General Sir Robert Baden-Powell's Scouting for Boys. The Original Edition combined the ninth edition of Seton's Birch-Bark Roll and some parts of Baden-Powell's classic Scouting for Boys (published in 1908).

Ernest Thompson Seton, a famous writer and artist, had founded a loosely-structured boys' program called the Woodcraft Indians with the publication of the first edition of his Birch-Bark Roll manual (1902). Seton had also sent a copy of the Birch-Bark Roll's 1906 fifth edition to Baden-Powell, from which B-P adapted material for Scouting for Boys.

Seton's introduction to the Original Edition makes it clear that he considered himself to be the real founder of the World Scouting movement: "In 1904, I went to England to carry on the work [of fostering a "Woodcraft and Scouting movement"] there, and, knowing General R. S. S. Baden-Powell as the chief advocate of scouting in the British Army, invited him to cooperate with me, in making the movement popular. Accordingly, in 1908 he organized his Boy Scout movement, incorporating the principles of the [Woodcraft] Indians with other ethical features bearing on savings banks, fire drills, etc., as well as by giving it a partly military organization, and a carefully compiled and fascinating book."

After Chicago publisher William Boyce incorporated the Boy Scouts of America in February, 1910, Seton signed on with the new organization and became the BSA's first Chief Scout. Seton also considered himself the key person in creating an American Scouting program. Seton never actually merged his Woodcraft Indians with the BSA, and 'Seton's Indians' continued a separate existence. When Seton resigned from the BSA in late 1915, he re-launched his program as the Woodcraft League.

Today's Scouting owes much of its program and tradition to Seton; indeed, it is difficult to imagine what our program would be like without Seton's contributions. Seton resigned from the BSA after an extended power struggle with James West, our strong-willed first Chief Scout Executive (1911-1943). Officially, Seton departed because of the then-new rule requiring all registered Scouters to be American citizens or intending to become so (Seton was a Canadian citizen, though he later became a US citizen; he died in 1946 in Santa Fe, New Mexico). [The struggle between Seton, West, and Dan Beard, and the early years of the BSA, is a fascinating story, perhaps best told in the 2010 book, The Scouting Party.]

The Original Edition has no index and contains no information about: knife and axe, mapping and map use, hiking, conservation, poison plants, poisonous snakes, alcohol and tobacco, or when to wear the uniform. Its information on physical fitness and health is weak. The book has a chapter on first aid, but it doesn't explain any first aid; it just gives a detailed description of how to get a course and take the exam through the YMCA. Similarly in the section on puberty (called "Continence"), Seton refers the reader to another source for information.

The book contains the International Morse code, along with a nearly worthless memory mnemonic that is supposed to allow the reader to learn the code in less than an hour [those of us who have had to memorize the Morse code only wish it could have been that easy]! Each letter is illustrated with a drawing of an object starting with that letter designed to remind the reader of the dot-dash code for that letter. One is even racist—the mnemonic for the letter N is "Nimble Nig" and shows a crocodile chasing a man! This remained in the Handbook through the early printings of the 2nd Edition.

As the BSA standardized its program in 1910-1911, it dropped or altered a number of the program recommendations contained in the Original Edition. One of these was Seton's complex system of "Honors," in which a boy (or man) could earn either "Honors" or "High Honors" for varying levels of attainment in a number of fields. "Red Honors" included heroism, horse riding, athletics, mountain climbing, target shooting, big-game hunting. "White Honors" included campercraft, archery, fishing. "Blue Honors" included nature study, geology, photography. The book spells out in considerable detail what level of achievement is required and warns the reader that he may not change any requirement. For example, to earn Honors under big-game hunting, some of the animals a Scout could kill included black bear, gray wolf (assisted by dogs), or a 14-foot crocodile! To earn High Honors, the list included elephant, gorilla, gray wolf (without dogs), or a grizzly bear!

For comparison, here are the contents of the original edition of Baden-Powell's Scouting for Boys, published in 1908: