Cover artwork by Norman Rockwell, 1970 Brown & Bigelow Scout calendar painting "Come and Get It," featuring a scene at Schiff Scout Reservation (former BSA National Training Center in New Jersey) of Scouts (in yellow neckerchiefs) cooking and canoeing. The 9th Edition will probably be the last Handbook to have a Norman Rockwell cover. Because Rockwell painted his last Scout picture before the BSA redesigned the Scout uniform in 1981, modern Scouts will tend to think of the Scouts in Rockwell's paintings as old-fashioned, much the way most of us probably think when we see earlier Rockwell paintings showing Scouts in knickers and campaign hats. The back cover has a quick reference tab and a table of contents. 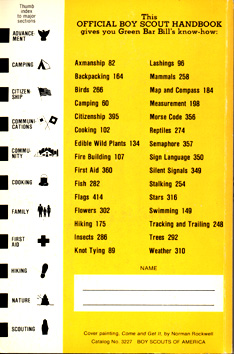 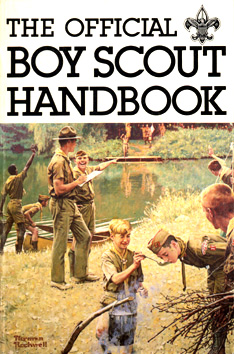 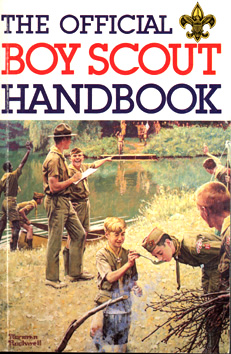 William Hillcourt came out of retirement and donated a year of his life to write the 9th Edition, which represented a return to the traditional Scouting program after the disastrous membership losses suffered by the 1970s program. The 9th Edition has a great deal in common with Hillcourt's earlier Handbooks (6th & 7th Editions); entire paragraphs and pictures are reprinted from the earlier editions.

While preserving many of the 8th Edition's topics (such as family and community living, general communication, information on ethnic groups, the extensive information about abusable drugs), the 9th Edition restores many traditional subjects missing for several editions: how to wear the neckerchief, when to wear the uniform, lashings, rowing and canoeing, stars, fire without matches, measuring heights and distances, Scout games, tracking/trailing, suggested books to read, weather, silent signals, semaphore, Morse code, Indian signs, manual alphabet for the deaf, sign language for the deaf, edible wild plants, the extensive information about wildlife. It also adds new subjects never before covered: hypothermia/exposure (barely mentioned previously), splicing, and backpacking. Indeed, it contains extra information on many subjects that is not required for advancement but is there for a Scout's use as needed, making this as much a Fieldbook as an advancement manual.

The book uses the cheap "perfect" binding. This edition drops the merit badge requirements; it includes only the requirements for the 14 badges required for Eagle Scout (it has color drawings of the other merit badges). The book's artwork is excellent. In addition, the BSA redrew the artwork on 75 pages for the 4th printing (1981) to show its newly redesigned uniform (the first redesign since 1922).